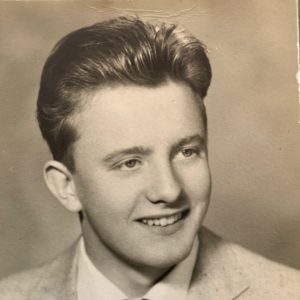 John J. O’Brien Jr., 81 of Naperville formerly of Orland Park, Midlothian and Burnside Chicago passedaway Monday, February 17 that St. Patrick‘s Residence peacefully in his sleep with family. Beloved husband to Rosita nee (Hahlweg) who predeceased him in 1981. Devoted son to the late John J. O’Brien Sr. and Marie nee (Klaczak) O’Brien who passed on February 17 th 1949 and son-in-law to the late Ernst and Emma Hahlweg from Germany. Loving father of the recently late Jeffrey T. O’Brien, late Ilona (Ben) Hill, Todd O’Brien and Tara (David) Stavropoulos. Proud Grandfather of Brenda Hill, Robert Hill, Marissa, Kira and Maia Stavropoulos. Loving brother to sister Judy (Mike) Llobera, and uncle to Miguelito, Martin, Martina, and Marc. Older brother to Robert (Mary) and uncle to Kelly, Karen (Howard) Jones, Matt (Christina) and Marcus (Amy) and older brother to sister Susan and late (John) McDonnell, and predeceased by baby brother Richard (Ricky). Most happily related to many more of their children and cousins. He was a proud Army Veteran who served his country and earned his mechanical engineering skills working on helicopters and airplanes. Dad started out as and Electrical Engineer teacher in Chicago after his Honorable discharge from the Army in 1960. In 1972 he became a proud and long serving member of the Local 150 Operating Engineers union and retired happily as a heavy equipment operator. He obtained his Bachelor‘s degree in 1986 and went on in slow times of work to be a substitute teacher at the local area high schools. He owned and operated an apartment building in Orland Park for over 30 years and relished in fixing each one up as tenants moved in and out, touching up the paint and woodwork. He enjoyed his grandchildren and travel during his retirement along with golf and breakfast with his buddy Jack prior to his Alzheimer‘s Diagnosis. His work ethic, humor and joy will be missed. Your memory and smile will live on in all of us! Orrico Kourelis Funeral Services Inc. handling all arrangements. Visitation and funeral will all take place on Saturday, February 22nd at Lack & Sons Funeral Home, 9236 S. Roberts Road, Hickory Hills, IL 60457.  Visitation 9 a.m -11:30 a.m. To be followed by a Chapel service at 11:30 a.m. Funeral to immediately follow with Interment at St. Mary’s Catholic Cemetery located at 87 th and Hamlin. In lieu of flowers donations can be made to the Alzheimer’s Association and enter tribute name John J. O’Brien at act.alz.org. For information please call 877/974-9201 or 815/462-0711 or www.orricofuneral.com